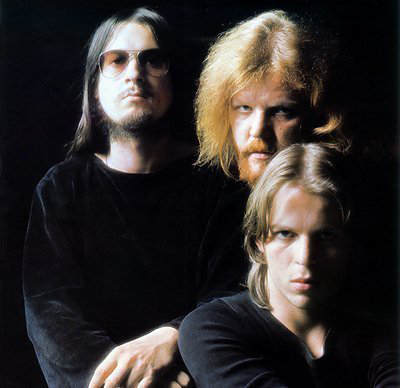 My first taste of Tangerine Dream and Edgar Froese came way back in 1975. My younger brother had been on a foreign exchange programme in France and had brought me back a copy of the band's most recent album Rubycon.

At the time I was very much into the new heavy metal and progressive rock bands of the time; bands like Led Zeppelin, Deep Purple, Black Sabbath, Yes and Pink Floyd. So when I first heard Rubycon I hated it. Where were the vocals, guitars, bass and drums? There were keyboards but no soloing and no melody that I could hear. So the album got shoved to the bottom of the pile and forgotten.

Over the next few weeks and months Rubycon refused to be ignored. I was at the school at the time and the money I got from my paper-round would only buy me the occasional album and I had an insatiable appetite for music. So out it would come and slowly the whole thing began to make sense. With what money earned I started buying up some of their other albums.

Fast forward a few years, it's 1980 and I'm at college. Still no money and a close friend is studying at Manchester University. We organise to meet up and spend the weekend checking out Manchester with his girlfriend. I arrive mid-day Friday at the train station and my friend says "You'll have to amuse yourself tomorrow night, we've tickets to see Tangerine Dream and thought you didn't like them". Clearly I put him right on that one and the next day we picked up another ticket.

The show that night was a revelation. Played in near total darkness behind a mesh curtain. Two rows of red spotlights over Chris Franke, centre-stage, in-sync with the sequencers and a couple of spotlights off stage.

The music was totally unfamiliar to me. I 'd not heard it on any of their albums but that didn't seem to matter as it sounded amazing. There was a guitar solo but not the painfully loud blizzard of notes played by most other guitarists at the time, but Edgar teasing out some beautiful and emotional sounds from the instrument. There was also a couple of solos from Johannes Schmoelling, one on piano, but again these were played to invoke emotional responses and not to impress with technical prowess. This wasn't just music it was art.
From that point onward I was hooked, a love affair that continued to today. Every chance I could I would buy their albums on release and catch them in concert.

And what shows they were. I'd pitch up with no idea what to expect. They never played formulaic concerts and their stage shows were always unique.

It was clear that the main driving force behind the band was Edgar, other band members came and went but the exceptional  music and Edgar always remained.  It was clear that the guy was a slave to the music, that he was compelled to write and perform. Music just poured out of him. So much so that Tangerine Dream wasn't enough and a string of great solo albums also  emerged.

He was never afraid to try something new. I remember the uproar when Tangerine Dream used vocals on Tyger yet it is now accepted as just another band classic.
I also remember the furore that surrounded the Dante series. Even I thought maybe this was a step too far but kept quiet, giving him the benefit of the doubt. Just as well I did as I was totally blown away by the Purgatorio show at the Royal Festival Hall.

Like many fans I was lucky enough to meet the man several times, usually back-stage after a show. They were always amazing fan-boy moments, me saying I loved the show and him thanking me for showing up. Every time I was always afraid to use too much pressure shaking his hand in case I damage it (seriously) only to find my handshake returned by a vice like grip.

My last meeting with Edgar was very poignant. It was after the Phaedra Farewell show last year at the Shepherds Bush Empire. I'd just spoken to Thorsten Quaeschning, asking him if this really was the last Tangerine Dream tour, Thorsten just smiled and shook his head.
I then met the rest of the band and finally Edgar. He looked frail but full of energy. I asked him the same question that I'd asked Thorsten. He fixed with his steely gaze and said something along the lines of "No, but there will be a final show and it might be sooner than you think". It was clear that he was thinking of winding the band down and was preparing the fans for that eventuality.

And there it was in a nutshell. He was a musician who cared about his fans, not so much that he would compromise his art but enough that he didn't want to hurt them when the final announcement was made.

That announcement came towards the end of last year and I wasn't surprised. I'd already decided that I would be there at the end , come hell or high-water, which ever continent  it was going to be on. I would wish him well in his retirement and give him the send off he so richly deserved.

The news that Edgar had passed away on the 20th January was a bitter blow. I feel as if I've been denied the opportunity to say farewell and thank you in the best way that a fan can, by applauding loudly after a great show.

I learned so much from Edgar. I've learned not to pre-judge anything, to give everything a chance and to look for the beauty in all things. As my wife will tell you, I'm far from perfect but I'm a lot closer to perfect than I would have been had I never encountered Tangerine Dream or Edgar Froese.

So thank you Edgar  ....and not just for the music.
Edgar Froese