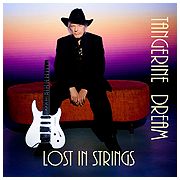 Dear Friends,
This is a message to you we are very sorry for…
On January 20th, Tuesday afternoon, Edgar Froese suddenly and unexpectedly passed away from the effects of a pulmonary embolism in Vienna.


The sadness in our hearts is immensely.
Edgar once said: “There is no death, there is just a change of our cosmic address."
Edgar, this is a little comfort to us.
Yours,

TANGERINE DREAM TEAM
Esoteric Recordings:
We are extremely saddened to hear of the sudden passing of Edgar Froese. The founding father of the legendary Tangerine Dream was a charming man and we are honoured to have worked on a series of Tangerine Dream releases with him. Our sincere condolences to Bianca and his family. RIP Edgar - your music will live forever.
Brian May:
RIP EDGAR FROESE
[Played Sonic Universe Concert in 2011 - Tangerine Dream and Brian May]

Progtopia:
Progtopia wishes to extend our deepest sympathy to former guest Jerome Froese and his family on the passing of his father, the visionary of Tangerine Dream, Edgar Froese. Personally, he was the most influential musician in my life, and he will be sorely missed.

Iris Camaa:
I will always remember you this way Edgar - you´ll be missed by all of us so much!! thank you so much for everything....

Paul Lawler:
Sad to hear about the passing of Edgar Froese. He was, in his heyday, a truly inspirational artist.
https://www.youtube.com/watch?v=hsEzBqpJZhA

Ron Boots:
Terribly sad news, Edgar Froese died on Tuesday 20.1.15.
He has been an inspiration all these years for me and was one of the finest people in the EM scene!!
All my best wishes to Bianca, Jerome Froese and family.
Thank you for everything you did for the EM scene en me in person!!
Edgar, I will never forget you, your humor or great generosity.

Thorsten Quaeschning
It's incredible and fanthomless sad.I can´t even realize it.My greatest teacher, master, colleague and friend – Edgar Froese passed away on January 20th.He was the most inspiring and wisest person I have ever met.It´s a huge loss.

it's very hard to find words in such an unbearably painful and sad time.
edgar froese (tangerine dream) has died on tuesday.
i will remember edgar as a person
who's been caring and empathetic in dark times,
who was never afraid to give either encouraging or critical feedback wherever necessary,
who's been incredibly inspirational on a philosophical level (far beyond just plain musical concerns) and had a profound impact on my thinking.
i guess i've often struggled to recognize authority figures - however, it's never been like that with edgar: even when we disagreed, i always respected his input and more than once had to acknowledge that he was right in hindsight.
essentially, in many ways edgar had the qualities of the kind of father most of us would like to, but few are actually lucky enough to have.
i'm eternally grateful for the advice and wisdom edgar has shared - and i will treasure it for the rest of my life.


finally, the world of electronic music has lost one of its most unique talents - and an artist who constantly managed to challenge and re-invent himself. rather than one of the classics from the 70s or 80s i'm therefore posting a video for a recent work by edgar below - one of my favourite pieces of the last ten years.


the dream will never be the same.

The Bob Moog Foundation:
With profound sadness we share that Tangerine Dream - Band founder Edgar Froese has died. Just three years ago we were honored with this rare interview with him, which we now share in his memory. Beautiful, deep ideas here about Bob's legacy and "the universe of creating sounds":