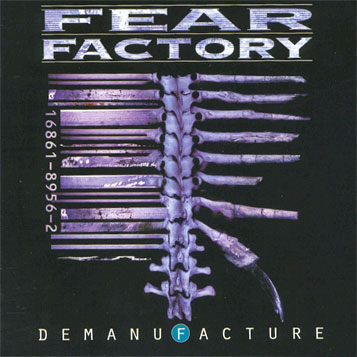 Silver Tiger Media have published a new interview with Industrial Metal band Fear Factory's vocalist Burton C Bell. In the interview Burt talks about the band's new album that's currently being recorded with the aid of Front Line Assembly's Rhys Fulber. Below is an excerpt from the interview:

And you do it so well. You have signed with Nuclear Blast, which we follows are really happy about. Your upcoming album is eagerly awaited in Australia. Can I please ask you about the upcoming album?

Ah yeah, we are still working on it, longer than expected, but, you know its classic FEAR FACTORY sound, the sound that fans have always expected, but I think because we are taking our time the songs are really well crafted. Without losing the edge or the angst. Without losing the essence of FEAR FACTORY but they are well crafted songs. We are working on the album cover right now. We have really connected with artist Dave McKean, who did the album cover for Demanufactureand Obsolete, he is working on something. We have an album title that we are happy with which really represents a good FEAR FACTORY title.

(Title not yet released)

Is there a particular subject focus of the album?

It’s based on science fiction, essentially futuristic concepts. It’s bringing the concept of man versus machine around again, but this time, the way I’m thinking about the machine is that it’s fully cognitive and fully understands where its place is and what it needs to do. So the machine has very human qualities now.

It’s a terrific turn of phrase you used earlier, the angst that comes through in the music. Is this album going to differ from previous works in that regard?

Not at all, you know, there is still so much angst that I deal with. Things happen in our lives and around our lives on a daily basis and I think I can say I’m a rather patient man, but things can still bother you and frustrate you and become a little overbearing. All these aspects of what we deal with in life in general are still part of the FEAR FACTORY concept.

Yes and you give people such a tremendous outlet for people experiencing angst in their own lives. Do you feel any appreciation for that?

Yeah. I’m actually honoured when people come up and say that the music and the words, and everything about FEAR FACTORY has inspired them and helped them through some dark times or been through some rough patches, and I feel like, as an artist I have succeeded in a way where I was able to connect with a young person or just a person in general, creatively. That our creation was able to be, as much as it is my therapy, it became their therapy too and so that’s successful to me and I’m very honoured and feel like I’ve contributed very positively into the world. Something to be proud of.

Is there something in particular you like most about the album so far?

I think the songs that have been written are just really good and very inspirational, so for me, the challenge is to now bring vocals and melodies that can rise up to the great music. I feel like I’m doing a fairly good job so far and just trying to come up with words that are very poignant and very though provoking, but not confusing and melodies that people can resonate with.

It’s probably a little selfish of me but I have always wanted to know if there is a favourite track you like to perform?

You know what, my first thought is Zero Signal because it’s always a fun song to play. That song embodies everything that FEAR FACTORY music is about, the song is just fun and the crowds love it. A lot of the fans know it from the Mortal Kombat soundtrack, the fight scenes you know. I think it was Cage and Scorpion (laughs)

Just for a little fun, what would be your ultimate rider for back stage?

Well as long as I got my two bottles of red wine, you know. Two bottles of wine for me, Dino gets a case of Corona, Matt gets his case of a good local brew…I’m not really big on eating at the shows, but nothing really outlandish. A nice shower would be nice.

You are very easily pleased.

I will be speaking to Dino shortly, is there anything I can ask him that you would love to hear asked? (laughs)

Oh terrific. I was hoping it wasn’t something he wouldn’t like put to him, so that’s great. Thank you Burton.

No, No. I know all the other details in his life. I got those answers.

Do you have one live show you have performed that stands out as paramount?

Yeah actually there is actually. First one that comes to mind is 1999, I believe, on the Obsolete Tour. We were headlining the tour through the United States, playing in New York, a sold out show of 3000 people. I come on stage, and we have the big Fear factory backdrop, and 3000 people, and I love New York City. So I walk out and look at the crowd and it’s like…so overwhelming as the crowd goes sick insane, and just that moment was so overwhelming I had to turn around and catch my breath because I was about to like, cry. It was so fucking unbelievable I had to like compose myself and turn back and really hit it home.
To read the full interview go here:
http://www.silvertigerphotography.com.au/#!burton-c-bell---fear-factory/c46n
Fear Factory