The Amorphous Androgynous: Announce a compilation featuring artists from Australia and New Zealand. 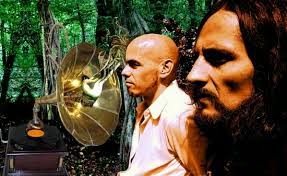 The Amorphous Androgynous have announced a compilation featuring artists from Australia and New Zealand.
Brian Dougans and Garry Cobain, who make up electronic outfit The Future Sound Of London, will launch A Monstrous Psychedelic Bubble (Exploding In Your Mind) - The Wizards Of Oz on March 16. It’s the fourth album in their psychedelic series.
The double disc features 34 tracks from bands including Tame Impala, Air, Russell Morris, Cybotron, Tyrnaround, Sunset Strip, Pip Proud, Pond and Krozier & The Generator.
A statement about the album read: “The Wizards Of Oz is devoted exclusively to the rich heritage of cosmic space music of our Antipodean brothers and sisters and in common with previous volumes, traces the lineage from the 60s to the present day with sonic delights from every decade in between.”
A final tracklist is still to be confirmed but streams of Sunset Strip’s Mercy Killing and Cybotron’s Raga In Asia Minor from the record have been released. Hear them below.
The album is currently available to pre-order.
The Amorphous Androgynous