The Enid: In urgent need of funds. 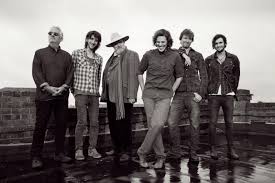 The Enid have launched an urgent bid for help to continue a legal battle that they say is essential to the band’s survival.
The Progressive Music Awards nominees report they’ve won every round in their fight against former label boss Gerald Palmer, who they say’s claiming ownership of their name and catalogue.
Robert John Godfrey and co need £15,000 immediately – or they may be forced to abandon the fight, or find a new approach that’ll wipe out their courtroom successes to date and require the finding of much more cash.
But they’ve already secured the support of a “mysterious magician” who’s vowed to contribute 50% on top of whatever their fans raise.
The Enid spent £17,000 on legal fees last year. They say in a statement: “In 2009 Palmer applied to the trademark registry to own the band’s name. Robert terminated his contracts with the benefit of legal advice. Palmer refused to accept these terminations, leaving us no option but to take action. Palmer was found by a court in 2012 to have acted dishonestly and in bad faith when he claimed to be the owner of the band’s name. He has laid claim to the copyrights of all Robert’s music.
“The band’s company issued proceedings against Palmer last year with the help of a specialist barrister. Having won every stage of the battle so far, we need our barrister to win the case. If we lose through lack of legal representation, we may never recover.”
The Enid ask that fans consider offering financial support by buying merchandise, music or become a member of their Enidi fan club.
And their “mysterious magician” has told them: “I was distressed to hear you guys are up against it right now. I don’t have pots of dosh – but The Enid have given me so much since the mid 70s with their exceptional music, and I have benefitted greatly utilising their work in my own stage work.
“I think it’s only right that I do what I can to help. I pledge to match every two pounds given with one of my own until we make up the urgently-needed £15k.”
In the video below the band explain their upcoming theatre tour and two album launches have taken up their entire current cashflow, adding: “If this had happened in three months time we wouldn’t be asking – but we have no one else to turn to. Raising a conventional loan is impossible. We are running on empty.”
The Enid