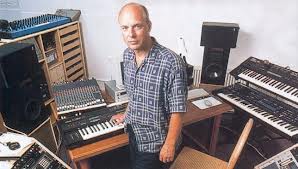 Iconic electronic musician Brian Eno has been interviewed Chris May for The Vinyl Factory. In the interview Brian talks about the dangers of modern digital recording. Below in an excerpt:

Eno was speaking on the eve of the release of Knitting Factory Records’ Fela: Vinyl Box Set 3, which he compiled. He has been an Afrobeat devotee since 1973, when he chanced on Fela Kuti’s albumAfrodisiac. I had asked Eno if he thought it was possible to retain the human touch, so explicit in Kuti’s Afrobeat recordings, while using sophisticated, digital studio-technology.

“It’s very difficult, and it’s continually under debate actually,” said Eno. “It doesn’t just apply with African recordings. It’s a problem everybody is having at the moment. Do I resist the temptation to perfect this thing? What do I lose by perfecting it? It’s difficult. Because now it is possible to mend anything, correct anything. The rhythm’s a bit out on that bar? OK, we’ll just stretch it a little bit. We can quantize everything now, we can quantize audio so the beat is absolutely perfect. We can sort of do and undo everything. And of course, most of the records we like, all of us, as listeners, are records where people didn’t do everything to fix them up and make them perfect.

“So the question that everybody’s asking is, is it getting any better as a result of all this? But it’s such a hard temptation to resist. You’re recording a song and find a note that is really quite out of tune. In the past, you’d have said, it’s a great performance, so we’ll just live with it. What you do now is retune that note. So you’re always asking yourself, have we lost something of the tension of the performance, of the feeling of humanity and vulnerability and organic truth or whatever, by making these corrections? It does make you question the role of new technology in the studio. And, of course, there are all sorts of reactions against it. You have Jack White with his studio in Nashville, which is all analogue, he doesn’t have any digital equipment in there. And I’ve worked with bands who’ve said, we’re going back to tape. They’ve got in all the stuff, 24-track recorders, all the gear – but within half a day they’re saying, fuck, we can’t edit this stuff. They’re just not used to working that way.

“There’s a very interesting exercise, I don’t know if you’ve ever tried it, not to use cmd-Z when you’re writing something. I write quite a lot on a Mac and like everybody I go back and change things. If you say to yourself, today I’m going to write exactly as if I was sitting in front of a piece of paper and writing – Jesus, it’s a whole different mind-set. Because you have to start thinking before you start writing. It’s really hard to go back to that. I’m not saying there is any advantage in going back to it, it’s just interesting to try it, to remind yourself of how completely you are now part of this new technology of writing.”

Did Eno think that belle époque West African records still sound vital and alive 40 or 50 years on because of, rather than despite, the very basic conditions under which most of them were recorded?

“I do,” said Eno. “It’s partly to do with engineers working with very limited resources and really understanding them well. If you’ve only got two mics, one compressor and a couple of pre-amps, you really know what they do, because you’re using them every single day. It’s like an artist who is extremely good with water colours. Water colour is a very limited medium but you can become incredibly good with it if that is all you have. Those old African recordings, and a lot of old rhythm ‘n’ blues and early doo-wop and so on, in many respects they were incredibly limited in recording tools. But nonetheless, the people who were using those limited tools had a real rapport with them, and knew how to get exciting results from them.
To read the full interview go here:
http://www.thevinylfactory.com/vinyl-factory-releases/the-dangers-of-digital-brian-eno-on-technology-and-modern-music/
Brian Eno