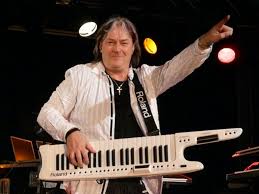 The Trevor Horn Band will play a one-off London show next month.
Former Yes man Horn will be backed by his The Producers bandmates Steve Lipson, Lol Creme and Ash Sloan for the gig at the city’s Shepherd’s Bush Empire on March 5. Geoff Downes will be on keyboard duty while Seal will provide the vocals.
Horn says: “I’m really looking forward to playing live again and I’m very happy that Seal can do the show. We’ve been working on his album for a year now and I’m just glad that we’re still talking and he’ll come and play.
“I’ve also got my old buddy Geoff Downes playing main keyboards so it promises to be a great night and there will be more special guests announced soon.”
The band will play tracks from throughout Horn’s career including Owner Of A Lonely Heart, Video Killed The Radio Star, Two Tribes and The Plastic Age.
Tickets are now available via The Ticket Factory or from the venue’s box office on 0844 477 2000.
Geoff Downes