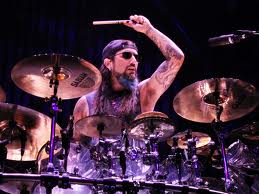 Mike Portnoy has joined Ian Anderson and others in making a guest appearance on the upcoming double album from Tiles.
The US prog outfit have confirmed their sixth record will now be called Pretending To Run, after it became a far more complex project than they’d originally envisaged.
Guitarist Chris Herin says: “We knew this was ambitious, lyrically and musically, but we didn’t plan on it ballooning into a double album. The songs kept coming and the storylines demanded more trips into the central character’s state of mind.
“So here we are with an elaborate concept album that follows in the best of prog traditions. Each disc plays like one long song. To help deliver to the full potential, we’ve enlisted a string quartet, a 25-piece orchestra and a host of special guests.”
Among those also appearing are Colin Edwin (Porcupine Tree), Adam Holzman (Steven Wilson) Kim Mitchell (Max Webster) and Mike Stern (Miles Davis).
Anderson – who appears at the inaugural Ramblin’ Man Fair in Kent in July – last year accepted a long-standing invitation to guest with Tiles, after he’d become a fan in 1999. The album was known as Other Arrangements at that stage.
Herin said at the time: “We sent Ian a moody atmospheric tune, and he wove some cool melodies in between vocal phrases – then cut loose with his trademark improvisation during the rideout solo. I think I listened to it 20 times to make sure it really happened.”
A release date has not been confirmed, although Tiles say they're "on the home stretch" with the work.
Ian Anderson Mike Portnoy