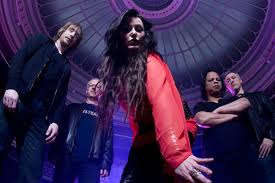 We're hugely excited to bring you this month's news... starting with an announcement we hope you'll LOVE -
PANIC ROOM are planning to record an ACOUSTIC ALBUM this Spring!

This follows the success of last year's tour dates, which featured a couple of acoustic re-workings in each show...
We were blown away by the response, and had countless requests for the band to record an acoustic album.
And so - that's exactly what we're going to do!

But we need YOUR HELP to make this a success...

PANIC ROOM are launching a Kickstarter campaign to fund this album, which means that you can get involved from the very start and - hopefully - help us to reach our goal!

Kickstarter is a type of 'crowd-funding' initiative which encourages new creative projects - including albums, books, films, etc - and allows the artist and their community to interact, and work together to reach a funding target!

We've set a target of £8,000 for the creation of the Acoustic Album, and we have just under a month to achieve this - our project deadline is 20th March!
This may seem like a lot of money, but in reality it's actually a very modest bugdet for an album-recording these days - and it covers everything from Recording Studio sessions, Mixing, Mastering, Manufacture... and getting the album ready to send to YOU!


We'll be recording at our usual studio - Sonic One, in South Wales - where we also created 'Satellite', 'Skin', and 'Incarnate'! And we'll be choosing tracks from across ALL 4 albums to recreate in an acoustic way for you... Stripping them back to expose their raw essence, and celebrating both their naked beauty (!) and their hidden depths.
There may well be some quirky surprises along the way too.... Well, you know Panic Room - we don't like to be predictable! ;o)

We'll also be setting up and recording as 'Live' - playing together as a 5-piece, to capture the raw, stripped-back magic of each track as we play it. It requires discipline to do this, and we have to be 'tight' - but that's half the fun of it!

We want to give you the sense that you're 'there' with us, up close and personal, hearing every breath and every string.
& We want you to feel the true Panic Room spirit - our musical mischief, mayhem, and magic - on the finished album!

We really hope you will be as excited as we are (:o) about the new Acoustic Album - and the Kickstarter project! Because it's going to be a really fun month, launching this campaign and then following our progress every day on the Project Page! It'd be great to see the project gather speed, and hurtle towards our Target! :oD

Want to get started now? Simply visit our Project Page here, and choose an Album Package to pledge for! :

PANIC ROOM - The ACOUSTIC ALBUM Project!
HOW DOES IT WORK?...
KICKSTARTER is a well-known and successful 'Crowd-Funding' platform, which allows an artist to set up a project and then invite people to submit 'pledges' of varying amounts, in exchange for 'Rewards'. Every project must have a creative theme, and must provide the pledgers with an end product - e.g. an album!

So you will choose the Reward / Package that you are most interested in - and we have lots to choose from! - and then commit to buy pay for this package. BUT! The beauty of a system like this is that the Project must SUCCEED (reach its financial target) before any money will be taken from its backers!

So - if we reach our target of £8,000 by 20th March, then our project has been a Success - and ONLY then will your payment be processed by the Kickstarter system, and transferred over to us.
And then we can create the album, knowing that the funds are already there in the bank!... It's simple, effective, and risk-free.

If we should fail to reach our target (boo!)... Well, no money will be taken from anyone, and we live to fight another day!
But our lives will all be a little bit darker, and sadder, without the joys of the Panic Room Acoustic Album to cheer us up.
(We would need to postpone the album this until a later time, if we can't raise the funds)

In some ways, our Kickstarter project works like a 'Pre-Order' system - you're showing us your support for the new album, and committing to buy it upfront! But, your payment will not be process until 20th March - and only then if we've reached the £8,000 target, which requires everyone else to have been supportive too!
So it's a real team effort... but we know how amazing and supportive the Panic Room family are, and we're just excited to get started and to see what happens!

So click on the Acoustic Album Project Page now, and check out our list of 'Rewards' and packages -
They range from a basic £10 CD to a Deluxe CD/DVD set - with exclusive footage from the studio sessions, a signed deluxe package, and your name written in the Credits list!....


We also have T-shirts, books, handwritten lyrics, and all sorts of rare and exclusive goodies to share with you! Just browse through the list of Rewards and choose your favourite - we hope we have something for everyone :o)
Panic Room