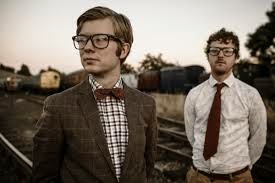 Public Service Broadcasting have been interviewed by Prog Magazine. The interview was by Jo Kendall and took place just after their recent album launch, The Race For Space, at the National Space Centre in Leicester. Below is an extract:

Why choose the Space Centre?
Wrigglesworth (drums): Because it’s fun!
J Willgoose Esq (guitar, synths, banjo, programming): “I hadn’t actually been here before, but I passed the sign on the motorway many, many times in the past on the way from London to uni in Nottingham. It piqued my interest and when we decided to do an album about space it suggested itself fairly obviously. The people here are really great to deal with, just so accommodating.
Concept albums still aren’t dead.
J: Yes, there’s still a lot around. I wrote something for online about this recently and in the process realised there’s actually been a lot in last few years. PJ Harvey even won a Mercury prize with one about three years ago.
Concept albums don’t have to be proggy or just about space... but this is.
J (laughing): This is about space, yes! I don’t know how proggy it is. I can’t play well enough to be in a prog band. (Too modest – Ed)
Your crowd seem to be slightly more mature appreciators, not young kids. Are you aware this is your audience and is the music you make deliberately geared to them?
J: If you’re approaching anything like a hard-headed businessman you wouldn't say a money-spinner was niche, spoken-word-slightly-melodic-mostly-instrumental nonsense would you? That crowd had found us cos most of our radio play has been through BBC 6Music.
Your image is very evocative of a certain style, a certain time.
J: It is, but we get kids as young as five or six going crazy for it...
W: ...Cos they like planes.
J: We can slot into daytime festival bills, or late night stuff like bonkers German festivals at half four in the morning. It still works across all ages. For people who lived through the periods we’re covering first-hand, it may be personally a bit more stirring. I find it very stirring to write about, though, and I wasn’t alive when it happened.
How did the launch night for The Race For Space go?
W: Well, I went in the Planetarium [opposite the stage] for the pre-gig film showing, and it was good. But I nearly missed the start of our gig, though (laughs).
At the time, just one picture went up on Twitter.
J: We didn’t want to retweet too many as we wanted to keep our surprise a surprise for people coming tonight ,which is a Sputnik replica. It's a thing that we built – well, Mr B, our visuals and set designer built.
W: I think he’s clinically insane.
J (turning to W): No, we’re not allowed to do it as a diagnosis, remember?
W: Okay, he’s insanely talented then.
J (laughs): So we were a bit on edge last night as there was some new stuff thrown into the set and we haven’t done a lot of it that off and we made a lot of mistakes. I always make a lot of mistakes...
But that’s the beauty of a live show, it’s not like just playing the record.
J: I agree. There’s got to be the potential for it to go wrong to be live.
W: And there’s so much that could go wrong!
What’s the worst thing that’s ever happened to you onstage?
W: In Italy, the entire gig just crashed. It went ‘Eeeeeeeeee!’ for ages. Luckily it was the last song. We could have got away with it being a challenging new work, perhaps.
So what’s in your production?
J: We’ve got the brass with us. We’re reliant on a bit of backing track, sadly, and where budget would permit we’d do it all live and where space would permit, ironically. There’s not that many places to put a big stage in here. There are four of us crammed on stage with all kinds of instruments – one and a half drumkits, all sorts of electronic bits and bobs and Mr B’s visuals. Then there’s the vintage TVs, the Sputnick that rises out of the floor and hopefully lights up, bells and whistles stuff, and takes too long to go down at the end of the set!
Very Spinal Tap!
J: We’re going all-out Spinal Tap! There was a picture tweeted last night under the quote ‘great surreal gig last night’ and there was us four playing away, the TVs in the front, Sputnick flashing away, this giant disco ball with four prongs coming off it, and our tour manager dressed as an astronaut dancing on a podium. It was one of the best photos I’ve ever seen!
So this is all going on tour in April?
J: Yes, and we'll take ‘Sputters’ out with us. There might be some stages that are too small for him though. We built it bigger that the real thing, which might be a mistake. The real thing was only 50 centimetres diameter. I think we doubled that.
It’s got to be visible.
J: Oh, you can see it. So it is tourable, but of you start making the production big it starts to go into the realm of venues where people can’t have that up-close and personal experience, so it’s finding that balance. This isn’t cheap.
Yeah, who’s paying for it?
J: We are. Well, the people who are coming to see us are also paying for it, but I’m not shy about saying we’re losing money on these gigs. These Space Centre shows aren’t to top up our retirement fund or anything. It’s not a regular Dog and Duck show.
But you’re not a regular Dog and Duck band, you want to do something different.
J: But we have been. We came through playing the old fashioned way, which I find quite satisfying. I think we’re at a level where people can still get that intimate feel but also look to doing more bonkers and stupid things.


When you wrote The Race For Space what other space-themed music inspired you?
J: Not too much, I tried to keep away from the tropes that had gone before. Bowie’sLow is in there and Eno is there by proxy rather than by his ambient themes. I didn’t want it to be too clichéd. We did get a choir involved, that came from Kubrick and the music for 2001. Then there’s Michael Jackson, Doobie Brothers, Meters, lots of old funk, but with our own take on it.
To read the full interview go here:
http://prog.teamrock.com/features/2015-03-07/first-look-public-service-broadcasting-live-in-space
Public Service Broadcasting