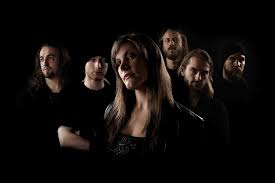 Floor Jansen says she is so busy with Nightwish that she has "no time" for her other band ReVamp.
Confirming that ReVamp are officially on on hiatus, Jansen admits she would fear for her health if she were to work full-time with both bands.
Jansen tells Metal Blast: "It’s inevitable, and from the day I joined Nightwish it has affected ReVamp. I found it very difficult to do both things at the same time.
"When I joined Nightwish, we were in the middle of the writing process, we had just planned to go to the studio, and we had to postpone the release. In between tours I was recording an album, promoting an album, and then when I started to tour with Nightwish, I was also touring with ReVamp, which was just a lot.
"This is not something that I wish to do, if only because of my own sanity and health, and because I feel that both bands need 100% of your devotion and time, and doing both at the same time just isn’t possible for me.
"So now it’s full-on Nightwish time, and there’s no time for ReVamp. Once we’re done with this tour we’ll have to sit together and see where everybody is in their lives, and see if there’s a chance to continue. It would be great, but I can’t tell the future."
The Dutch singer replaced Anette Olzon in Nightwish in 2012 and she says the fans' reaction to her appointment has been mostly positive. However, the trolls have also had their say.
Jansen adds: "We have a Dutch saying, 'Hoge bomen vangen veel wind' – 'High trees catch more wind.' So the more well-known you get, the more of this kind of stuff you’ll get. There are trolls everywhere, but I rather emphasise the positive things.
"I feel sad for those people. You can focus on those few unfortunate souls that spend all that time trolling other people. But I prefer to focus on the majority of the positive reactions, the fantastically warm welcome I got at the beginning, and the high anticipation there is now for this new album."
Nightwish release Endless Forms Most Beautiful on March 30.
ReVamp