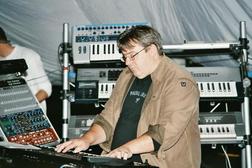 Again a nice warm gathering of fans and musicians in the Planetarium in Bochum. It had a different atmosphere from previous issues because of the loss of Edgar Froese earlier this year.

There where wonderful tribute's to Edgar Froese who was honored by many who spoke and remembered him.

Most impressive for me where the thoughts of Thorsten Quaeschning! Although you saw he was in pain and struggling with his remembrance of Edgar it was deeply emotional to hear him speak and reminisce.
A Musical/Visual tribute made by Uwe Zelt and optical engineer of the Bochumer Planetarium
Klaus Dieter Unger left the room in silence for minutes after it played out. Again we where all struck by the idea that Edgar left us for another universe as he would have said it!

We also had 2 great live performances by Picture Palace Music and Rene Splinter.
The PPM set was powerful stuff, I loved it!! Rock on!!

And Rene with his Tangerine Dream inspired music was a wonderful diversion on all speeches held that evening. His wonderful version of Stuntman by Edgar (only Piano!) was one of the highlights of the evening for me.

Highlite for me was the fact that we as Morpheusz won 2!! Awards.
One for Tantalizing Thoughts at the Dawn of Dreams and the second one as best International Artist/Band.

A BIG thanks to all who voted for us during the elections, much appreciated.
Prices where also given to Tangerine Dream, Picture Palace Music, Thomas Jung and Bernd-Michael Land.

For the full election results check this home page of the Awards.
http://www.schallwelle-preis.de/

A personal thank you for both Price givers who gave away the price during this evening.
Your speeches where heart warming!
And thanks to all who make these Elections possible, workers upfront and behind the scenes!!
And of coarse a big thanks to Eric, Harold and Frank for being Morpheusz with me!!
Ron Boots