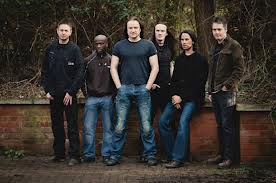 The Gutter Society website has published an interview with guitarist Karl Groom and keyboard player Richard West. It was written by Dodo Datel and below is an extract:


So what is the present motivation behind you two composers working together for 25 years? Richard, among other things, concerned also in the inconceivably underestimated group LEAGUE OF LIGHTS, which could be a secret choice for fans of bombastic pop rock with female vocals like contemporary WITHIN TEMPATION) didn’t hesitate too long with the answer: “For me it’s the same, the desire for making music. It’s the same that I have had when I was 12 years old. You start learning to write and you just want to write something beautiful, that’s the main motivation for me. And the will to continue to improve, we always look at every element that we have in the recording and writing process and we try to think in all sorts of ways to improve those things. Because I think when THRESHOLD stops improving, than its dead really, you got to keep moving forward.” Karl doesn’t see it otherwise: “The need for change when you’re writing … It’s essential to keep moving forward, to make THRESHOLD relevant today. I don’t wanna be one of those bands that tours on past glories and forever be playing, I don’t know, the whole Extinct Instinct or something else. It has to be something that is relevant today and currant, we keep writing for the moment. Funny thing is that although we considered our mix to be progressive metal, prog metal came to become something else later on really, it’s a different kind of music than us, we sort of stand outside of it in many ways. But I’d really like to think that we’ve created a sound that people can recognize as THRESHOLD when they hear our music because I think we have quite a distinctive sound. Not much like a prog metal band, it’s really different from this kinda DREAM THEATER blueprint. It’s because DREAM THEATER became so successful, people see them as some sort of ideal of how prog metal should sound but that never fitted our sound.”
On the other hand, my debaters don’t despise the idea of being perceived as the continuants of far long British art/prog rock tradition. Richard proudly endorses this lineage: “I think we keep that tradition of bands like QUEEN and GENESIS. When you hear them you know they sound like anybody else, PINK FLOYD as well. They have their very unique sound and that’s something we also try to do. There seem to be a lot of prog metal copycats. They just wanna sound like DREAM THEATER or somebody else but we never intended doing that. Music is about being original, making something you never heard before and that’s just what we try to do.”
At last we have to wish you a successful concert and to provoke a little with the question which of 10 THRESHOLD albums you fathers see as the most successful, except for the newest one which necessarily needs to be the best. Karl catches on to the hard task as the first one: “To me, my favourite album is Subsurface. It might not have the absolute best songs from our catalogue but I think overall it’s most consistent for me and my favourite Mac’s performance. I think Mac was at his best then, we wrote the right songs for him, we knew the right tricks to make his voice work, it was the golden moment for me.” It was not so surprising Richard agreed, even though with a small diplomatic interjection: “I’d go for Subsurface, but For the Journey really reminds me Subsurface because it feels like a journey all the way through, like a really coherent record.”
To read the full interview go here:
http://guttersociety.com/web/?p=1951
Threshold