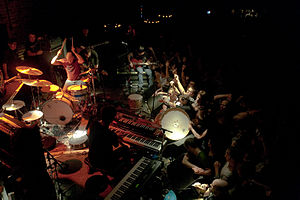 …And You Will Know Us By The Trail Of Dead have launched a video for their track Lie Without A Liar.
It’s taken from last year’s album IX, released via Superball Music.
Guitarist and drummer Jamie Miller, the most recent addition to the Texan outfit’s lineup, says: “‘Lie Without a Liar is the first song I wrote and sang as a member of the band, and my brothers felt strong enough about it to release it as a single.
“Playing it at all the great festivals we’re invited to is a personal milestone – it’s gonna be a fun summer!”
Trail Of Dead appear the Marble Factory, Bristol on May 28 then the Camden Rocks festival on May 30. The shows are part of a wider US and Europe tour.
Trail Of Dead