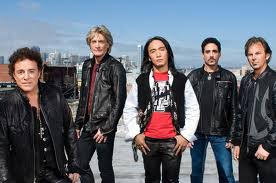 Mascot Label Group's Music Theories Recordings and Neal Schon have announced the release of "Vortex" on June 23. The 2-CD all-instrumental album utilizes rock as its foundation, while also embracing elements of jazz, classical and world music in an 18-track stunning, sonically explosive collection of original compositions. The release is dedicated to Schon's best friend and wife, who serves as his true inspiration every day (Both "Lady M" and "Triumph Of Love" were written for her, the latter of which he performed at their wedding on December 15, 2013.)
Says Schon: "This is an evolutionary album for me. I've always aspired to be a better player and push musical boundaries. And sure, I've sold 80 million records with JOURNEY, and I'm proud of that, but this album is really me — all based on my guitar, which is my 'voice.' It's bold. There's love, and there's definitely fire and an element of danger. And the energy level is off the hook."
That's evident from the first, mysterious-sounding measures of "Miles Beyond", the scalding tribute to jazz genius Miles Davis' pioneering fusion recordings that opens the album. The tune blends Schon's soaring leads, tectonic plates of grinding rhythm and brilliantly layered melodies within an arrangement that embraces Middle Eastern flourishes plus flashes of African drumming by Steve Smith. "Schon & Hammer Now" is a furious jam between the guitarist and his longtime friend and creative foil, Grammy-winning keyboardist Jan Hammer, whose many accomplishments include charter membership in the groundbreaking MAHAVISHNU ORCHESTRA. And the two match their brilliant technique and relentless invention throughout, sparring with the grace and speed of a young Mohammad Ali. Schon reveals, "Jan is all over this album. I wrote the material to give Jan room to stretch. There are not many three-minute ditties. It's all huge, epic, bombastic…futuristic." After hearing the completed album for the first time, Hammer made a succinct observation, "This is fucking amazing."
"Airliner NS910" is further proof. It's all speed and swagger, with Schon skywriting the song's sweetly singing theme in the indelible vapor trail of the instantly recognizable operatic tones of his signature model Paul Reed Smith guitars. He reflects, "Since 'Vortex' is a two-record set, it's both my ninth and tenth solo albums. That's where the 'NS910' comes from."
The music of "Vortex" originated in the hard drives that Schon is constantly filling with ideas for riffs, melodies and chord progressions at home. But they came to life at Berkeley's Fantasy Studios, his preferred spot for recording since JOURNEY cut the 10-times-platinum number-one album "Escape" there in 1981. Schon states, "It's my home away from home. I spend so much time there that they've given me my own locker."
Schon produced and played bass on "Vortex", too, and was joined in the studio by Smith and keyboardist Igor Len. Hammer and Len also appeared on Schon's seventh solo album, "The Calling", which was followed by the blues-inspired hard rock album "So U". He offers, "Igor and Jan complement each other, and me, beautifully." And "Vortex"'s "Eternal Love" is a testament to Len's creativity. The song, a richly emotional ballad, features Len alone on piano. The guitarist observes, "He sat down and played the tune spontaneously, and it was so gorgeous and deep that I had to have it on my album." Schon offers his own reflective solo performance on "Vortex" with the sparsely arranged acoustic guitar meditation "Mom", dedicated to his mother, Barbara Schon. He reveals, "Like most of the performances on this album, it wasn't premeditated. I'd just pick up a guitar and tell my engineer Jesse Nichols to hit Pro Tools."
"Vortex" track listing:
CD1
01. Miles Beyond02. Awakening03. Cuban Fly Zone04. El Matador05. Eternal Love06. In a Cloud07. Irish Cream08. Lady M (Our love Remains)09. NS Vortex
CD2
01. Tortured Souls02. Schon & Hammer Now03. Airliner NS91004. Unspoken Faith05. Twilight - Spellbound 06. Triumph of Love07. Mom08. Talk to Me09. White Light 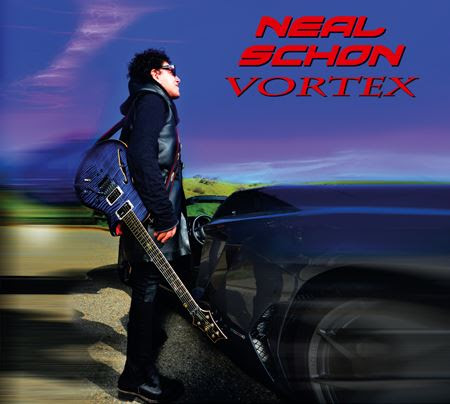