Roger Waters: The Wall Live show to shown in cinemas. 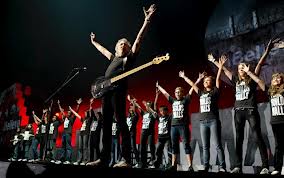 Roger Waters' film about his The Wall Live show is to be shown in UK cinemas for one day in September.
Roger Waters The Wall will be shown at selected Picturehouse cinemas on September 29, with tickets going on sale on June 19 via Fathom Events. Details will be confirmed in due course.
The film was premiered at last year's Toronto International Film Festival. Directed by Waters and Sean Evans, it was filmed in three cities across two continents.
The show is set around a 500-foot wall prop, and it's said to have cost £37m to stage. The London show in 2011 saw former Pink Floyd bandmates David Gilmour and Nick Mason make guest appearances.
The movie version is described as “a rib-rattling, sonically stupendous document.” Promoters add: “The film, like the piece of music on which it is based, is drenched in Waters' politics and memories."
Roger Waters