Clive Nolan: Famed keyboard player to perform all 3 of his musicals in just 2 days. 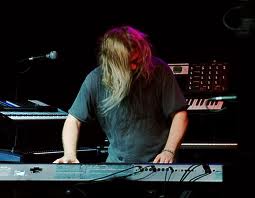 Clive Nolan will celebrate his musicals by performing all three works – She, Beyond The Veil and Alchemy – over two days in September.
He’ll play She on September 4 at Cheltenham’s Playhouse Theatre, followed by Beyond The Veil in the venue’s Green Room on the afternoon of September 5. That night he’ll deliver Alchemy in the main auditorium.
And the Arena, Pendragon and Shadowland composer has warned that The Fire And The Quest event is already close to selling out.
Nolan tells Prog: “I’m marking 10 years of working on the musicals. We’re performing a new version of She on the Friday, then a bonus acoustic show with guests on the Saturday afternoon, then the ‘off West End’ production of Alchemy on the Saturday evening – followed by the inevitable after-party in the green room.”
He adds: “The vibe will probably be one of a convention, with people gathering around in the local area. I estimate that 70% of the audience is coming from outside the UK.”
The weekend will be filmed for future release via Metal Mind Productions. More information can be found at Nolan’s website.
Clive Nolan