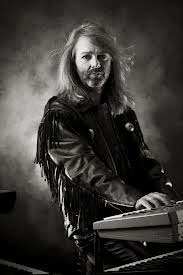 Douglas R Docker has started a PledgeMusic campaign for a new Docker's Guild album. Here's hiw he describe's the project:

"The Heisenberg Diaries - Book A" Album

A collection of vintage sci-fi movies and TV series soundtracks reworked in the Docker's Guild style.

This is Douglas, the creator of Docker’s Guild, a massive prog metal space opera which will unfold through 5 seasons and 9 albums and which features a cast of world class international special guests such as Amanda Somerville (Avantasia), Elize Ryd (Amaranthe), Nita Strauss (Alice Copper), John Payne (Asia), Jeff Watson (Night Ranger), Göran Edman (Malmsteen), Tony Mills (Shy), Anna Portalupi (Tarja Turunen), Guthrie Govan (Asia), Tony Franklin (The Firm), Gregg Bissonette (Duran Duran) and many more!
Visit the dark world of The Mystic Technocracy, where a silicon-based techno-organic alien race attempts to wipe out all life on Earth through organized religion, while tormented scientist Jack Heisenberg makes it his mission in life to save humanity. His quest will take him across the universe and on a personal journey from which there is no return.
Docker’s Guild debut album “The Mystic Technocracy – Season 1: The Age of Ignorance” was released by Lion Music in 2012 to great critical acclaim. The album collected a huge amount of rave reviews and was voted Best Album of 2012 in several countries, and I even won a Best Keyboardist of the Year award in Sweden.
It is now time to give Season 1 a following. The new album “The Heisenberg Diaries – Book A: Sounds of Future Past” is a collection of vintage sci-fi movies and TV series soundtracks reworked in the Docker’s Guild style. A journey of discovery in the past of Dr. Jack Heisenberg, the main character of The Mystic Technocracy, before the events of Season 1, before the Order of the Swan, before the “God gene”, before the dark times….
Help us make this dream come true!