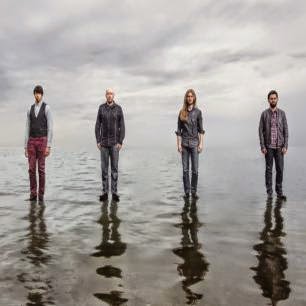 New England instrumental progressive outfit Earthside have issued The Closest I’ve Come as a preview to their debut album, A Dream in Static.

Due for release later this year, the project introduces the work of guitarist Jamie van Dyck, keyboardist Frank Sacramone, bassist Ryan Griffin and drummer Ben Shanbrom, who explains the significance of the lead track.
Shanbrom says: “The Closest I've Come was a coming of age song for us. It was the first piece of music we wrote for the record, and in a very personal way it represents our journey, both as musicians and people, from adolescence to maturity. This track defined us on a core level and set the bar for our future output.
"It also tells our story through an instrumental medium - the feeling of pushing oneself and striving for something greater, but also longing to reach the point of fulfilment - which rarely happens in the creative process."
Earthside recorded A Dream In Static in Stockholm, Sweden, with producer and mix engineer David Castillo who has worked with Opeth, Katatonia and Bloodbath. Mixing and mastering was handled by engineer Jens Bogren, who has worked with Opeth, Soilwork and Devin Townsend.
The project also sees the group joined by the Moscow Studio Symphony Orchestra.