IO Earth: Announce the details of their new double album. 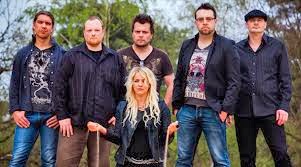 The release date for the follow-up to Moments has yet to be revealed but the band have confirmed it'll be available in time for their orchestral show at Birmingham’s Crescent Theatre on May 23.

New World is the band’s first studio recording with vocalist Linda Odinsen who joined the group in 2013. And guitarist Dave Cureton says it shows just how far their sound has progressed.

He reports: “We truly believe this album contains the best material we have ever produced. The IO Earth sound just keeps on evolving and improving.

“We feel we are always learning and growing as musicians and composers and New World really showcases that growth. We can't wait for you guys to hear it.”

The album is now available to pre-order from the band’s website, while tickets for the Birmingham show are available directly from the venue.

They’ll also play this year’s Cruise To The Edge with Yes from November 15-19.