Nightwish: Release another episode of their documentary videos for Endless Forms Most Beautiful. 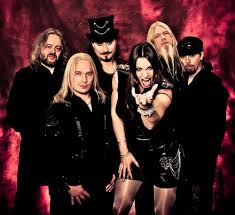 The band have released another episode in their documentary about the development of latest album Endless Forms Most Beautiful.
The latest clip was shot in the days running up to their first tour date in New York in April.
Jansen says: “I’m nervous – I don’t want to be, but it’s a good one because it puts you on top of your game. I think you need that to nail it.”
The follow-up to 2012’s Imaginaerum was released in March. Mainman Tuomas Holopainen recently told how he’d made a point of not using Jansen’s vocal ability to “show off” the band’s talents.
Nightwish play London’s Wembley Arena on December 19 as part of a European tour.