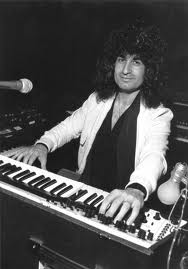 Patrick Moraz will release a collaborative album entitled Moraz Album Project – MAP – later this year.
The former Yes and Moody Blues keyboardist worked with drummer Greg Alban for most of the record, alongside contributions from Lenny Castro (Fleetwood Mac, Elton John), Matt Malley (Counting Crows), Dave Van Such. Patrick Perrier and John Avila.
The nine-track work was started 10 years ago after Moraz and Alban met on the road in 1983, and the keyboardist later asked the drummer to record for his 1984 album Time Code.
Alban tells EasyReader: “Originally it was a way for me to express myself, then it kept expanding as we got other players on it.
“You don’t normally write music around keyboard and drums – usually it’s written around vocals or guitar. It’s definitely unique, masterful music. It compares to the master composers, Mozart, Beethoven and such.”
An official release date for MAP will be revealed in the coming weeks.
Patrick Moraz