Frontiers Music SRL, is pleased to announce the upcoming live release by the legendary rock group YES, entitled LIKE IT IS – YES AT THE MESA ARTS CENTER on July 3rd in Europe and July 10th in North America.


Available in 2CD/DVD, Blu-ray and Digital formats, with a later release planned on vinyl too, this new live album, which follows a similar path to the successful release “Like It Is – Yes at the Bristol Hippodrome”, sees two of the band’s signature albums, 1971’s FRAGILE, and 1972’s CLOSE TO THE EDGE performed live in their entirety on the band’s 2014 world tour.

Recorded live on Tuesday August 12th, 2014 at the Ikeda Theater in Mesa, AZ, featuring Chris Squire, Steve Howe, Alan White Geoff Downes and Jon Davison, offers an exciting take on two amazing pieces of music which include live staples such as “Roundabout”, “Heart Of The Sunrise”, “And You and I” and the epic “Close to the Edge”. 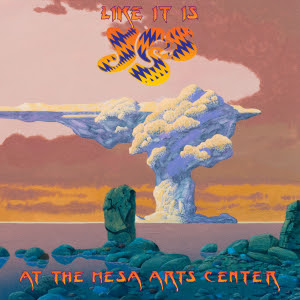