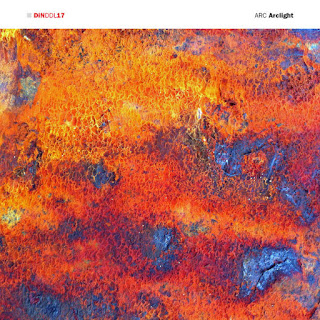 
Arclight once again sees DiN label boss Ian Boddy teaming up with Moogmeister Mark Shreeve as the duo ARC. Recorded live in concert at the Capstone Theatre, Liverpool on 15th November 2014, this is the sixth live album by ARC. The performance features four tracks from the duo’s previous live CD album Umbra (DiN45) alongside forty minutes of new material spread over the remaining three pieces. With almost 90 minutes of music the decision was taken to release this as a download only release on the DiNDDL sub label so as to preserve the entire performance. This follows on from a similar thought process inherent in the EC12 release (DiNDDL16) by Ian Boddy & Erik Wøllo which also features the whole of their Electronic Circus concert.

The music on Arclight features all the trademark ARC elements of thunderous sequencing, grand choral pads & ambient electronic textures. The title track is a tour de force of Moog sequencing ranging from infectious melodies & grooves to industrial mayhem & dynamic jumps. Filtered Through Haze is a far more laid back & ambient excursion with unusual sequencing patterns overlaid with a nebulous cloud of keyboard pads & Moog bass. The last of the new tracks, Into Dust, is a quirky rhythmic piece with glitchy drum loops & a sultry organ riff.

Once again ARC prove themselves to be masters of the electronic music genre and have produced a stunning live performance that the listener can experience in it’s entirety on Arclight.
credits
releases 03 July 2015

All music composed by Ian Boddy & Mark Shreeve and performed live at the Capstone Theatre, Liverpool on 15th November 2014.