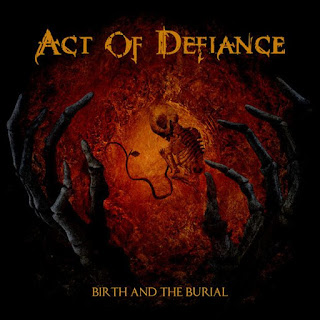 
"Throwback", the first video from ACT OF DEFIANCE, the band featuring former MEGADETH members Shawn Drover (drums) and Chris Broderick (guitar), alongside ex-SCAR THE MARTYR singer Henry Derek Bonner, and SHADOWS FALL's Matt Bachand (bass), can be seen below. The song is taken from ACT OF DEFIANCE's debut album, "Birth And The Burial", which will be released on August 21 via Metal Blade Records. The clip was shot by renowned director Corey Soria (DANZIG).

Drover states: "'Throwback' is not your average speed/thrash metal tune. The song is also pretty progressive at times, with a lot of stopping and starting going into the bridge, and they are all at different times, so we really had to memorize the count."

He continues: "I was really impressed with the way Chris wanted to write a little bit out of the box, shall we say. Chris also wrote all of the lyrics for the song, which were also impressive to me. They are certainly dark in the subject matter, as they should be to fit the aggressiveness of the song. Quite a nice fit, if you ask me.

"Birth And The Burial" track listing: