Glen Drover: outlines his plans for a new album to MetalHead Radio 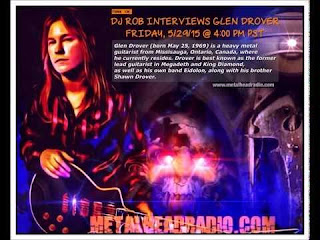 Glen Drover has outlined his plans for a new album.

He’s been working on several collaborations with guest vocalists and released a lyric video for the track Discordia last year with Queensryche frontman Todd La Torre.

And he says once he’s recorded enough tracks, he’ll release the collection as an album – and reveals Testament’s Chuck Billy and Sanctuary’s Warrel Dane are on board.

He tells MetalHead Radio: “Every few months I release a single that features a different singer. The first was with Todd and I did one with a new band Untimely Demise that aren’t really well known, but I really dug the singer Matt Cuthbertson. It's called Walls Of Blood.