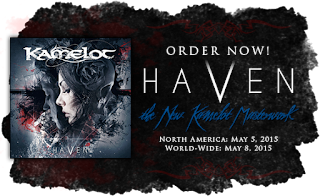 Kamelot are gearing up for another string of live dates in Europe in support of their new album, Haven. They have checked in with the following update:

"Attention Kamelot Nation Germany! We will be playing two exclusive Club shows in your country next July 1st and July 2nd with special guests Serious Black. New songs from Haven and maybe some surprises to spice up the setlist; these will be intense shows that you don't want to miss!"