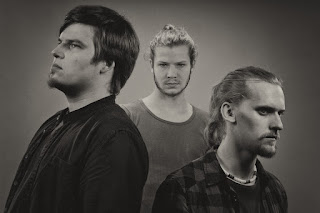 Austrian progressive rock power trio, PHI will embark on a European tour this August promoting their most recent studio album titled “Now the Waves of Sound Remain” released via Gentle Art of Music last year. See the tour dates below.

After being formed in 2006 and achieving first respectable successes in 2008, PHI have since released their critically acclaimed album "Years of Breathing" and consequently toured the stages of Austria, Germany, Switzerland, Hungary, Romania and Lithuania. By means of their brand new album "Now the Waves of Sound Remain", the power trio now presents the fascinating result of the artistic vision that the band likes to call double bottom.

Finding the formula for how to reach the perfect mixture of raw power and deep emotion; how to fuse a love of elements of the past with the natural curiosity of one’s own artistic evolution, without compromising the very own distinct voice; finding that sweet spot where inexorable force coexists with big feelings in perfect harmony – despite enormous complexity. That is the approach that Markus Bratusa (vocals, guitar, programming), Arthur Darnhofer-Demár(bass, vocals) and Gabe Cresnar (drums), all established in the vicinity of Vienna’s legendary Hallucination Company, have been following and have now brought to an impressive conclusion through the release of "Now the Waves of Sound Remain."

On this record the mighty walls of TOOL's guitar sound meet the driving rhythms of RUSH and gently merge with sophisticated arrangements that resemble the delicacy of PORCUPINE TREE. The JEFF BUCKLEY-esque jazzy elegance provides the music with the final ingredient that completes the fused aesthetic of the old and the new.

In order to make this album the comprehensive experience that it has ultimately become, PHIhave created and implemented a textual concept in which the discourse on music’s role, its significance, its drift into banality and the corresponding deterioration in value in today’s society functions as a backdrop for a both detailed as well as cynical analysis of major issues. The enormously powerful message of this album lies in the fusion of emotion and the coolness of the intellectual: art is so much more than only a mere product. "Now the Waves of Sound Remain" challenges the boundaries: this is music with a double bottom.

To give this record the scope that it deserves PHI joined forces with Gentle Art of Music, the label owned by RPWL-duo Yogi Lang and Kalle Wallner. Furthermore, the final touch of the album’s sound was provided by none other than Jon Astley, whose earlier accomplishments include works of LED ZEPPELIN, THE WHO, TORI AMOS and ANATHEMA.

Progressive Rock is still alive and kickin’, and PHI are demonstrating this fact with force and finesse by playing live shows that no one can ignore. A real POWER trio sound a la RUSHthat meets complex arrangements a la PORCUPINE TREE and TOOL shatters the earth, while leaving cliché and the usual limits of rock music far behind. Their live shows are a revelation, even for people that never heard a band that far out there.