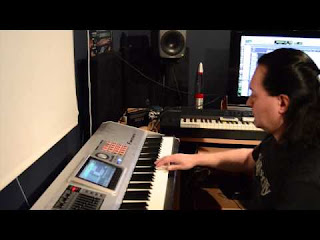 On this video I'm practicing to play the solo of "River of Tuoni". In 2008 on album version I played this solo with guitar, also later on stage. When I changed keyboards to be my main instrument on stage, I had to learn to play some of my earlier guitar solos with keyboards...This one was quite fun to convert into keyboard solo. - Tuomas Seppälä/AD