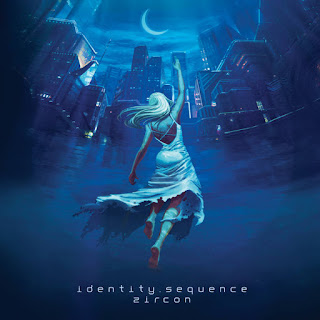 Hunter Finch This album has an amazing sound, from the sweeping openness to the crisp vocals. Another home run from Zircon. Favorite track: Neurobazaar.

about  https://zirconstudios.bandcamp.com/album/identity-sequence
Two people exist alone, isolated in an era where everything and everyone is networked and digitally connected. The shackles of physical forms have been almost entirely abandoned. Yet despite this wondrous, highly-technological world, they long for a different existence and the warmth of human connection. Through an abstract, interpretive narrative, this album chronicles a journey of self-discovery, development, and philosophy as two fates intertwine.

Identity Sequence is the culmination of a five-year musical endeavor. Countless sessions of writing, producing and mixing dozens, if not hundreds, of sketches and ideas, whittled down and culled into my very best work. To say this has been a labor of love would be an understatement. Since I started working on this album, I've moved three times, graduated from college, got married, scored three major video games, traveled abroad, and innumerable other life events. Through it all, this collection of songs and instrumentals has gradually taken shape, developed and nearly come to fruition.

The style of Identity Sequence could best be described as organic electronic dance music. It is my own interpretation of the interaction between man, machine, and environment - how our emotions and actions change and shift through technological advancement, and how they stay the same. More specifically, it's progressive trance, dubstep, drum and bass, breakbeat, atmospheric downtempo, and many other highly rhythmic electronic subgenres rolled into a cohesive body of songs that is meant to be listened to from beginning to end in a single session.

Though I've been the writer, producer and engineer on every one of the album's 14 tracks, Identity Sequence features numerous other performers who lend to its breadth and diversity. These include Jillian Aversa, the co-writer, vocalist and lyricist for many of the albums vocal tracks, Chris Gordon (malevocals & acoustic guitar), Juan Medrano (electric guitar), Jeff Ball (violin & viola), Dan O'Neill (alto soloist), and even a full choir - the Philadelphia Men's Chorale. Visual artist Jessie Lam created the beautiful album artwork, along with a set of standalone pieces inspired by the imagery of the album.

My goal with this album is to truly create a world, or even a universe, that envelopes the listener and transports them away from our reality. Though certainly danceable, this is not music designed for a quick listen on the dancefloor and forgotten, but songs that I hope will have a lasting impact, staying relevant for years and holding a place in the listener's collection of music... even as electronic music trends come and go. Though I can't know if I will have been successful until Identity Sequence has been out for years, I hope that you will also feel the sense of depth I strived to achieve with each and every track.
credits
released 12 December 2012