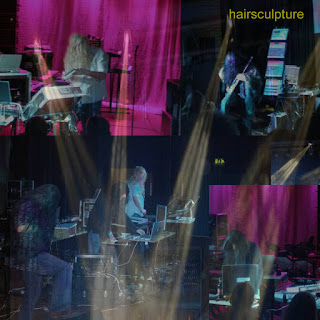 AirSculpture are a UK based electronic music group. Its members - Adrian Beasley, John Christian and Peter Ruczynski -established it in the mid-1990s as a reaction to the safe, stale EM music scene that no longer reflected their tastes. AirSculpture recreate the energy and edge of '70s improvised EM.

Electronic music. Dull, right? Some bloke sat behind an ironing board sneakily playing Bird Crush Saga on their laptop and occasionally twiddling a knob.

This was Hampshire Jam 7 (the Final Encore). At the time it was going to be the last ever HJ and airsculpture, mainstays of the series, had to go out with a bang. It was a short set (just shy of half an hour) following Pete's solo performance. So no messing about. And who's idea was it to wear wigs? Nobody's admitting to it, but the trip to the costume shop seems to have been done with a purpose. It's like punk never happened.

From the opening stylophone solo, through the monster riffage of the majestic Furry Sequencer, to the foot-on-the-monitors guitar... er... synth soloing this is just no compromise fun. Any questionable bits are purely down to the difficulty in playing with two feet of hair up your nose.
credits https://airsculpture.bandcamp.com/album/hairsculpture-ep
released 03 August 2014