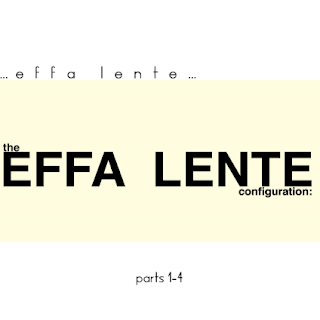 
Effa Lente is a project conceived by David Alfred Reilly, a classically trained multi-instrumentalist, and the former lead guitarist of Irish doom metal band, Graveyard Dirt. Having worked in a recording studio for a number of years working mainly on music for TV and film, and also having recorded the Graveyard Dirt EP 'Shadows Of Old Ghosts', Reilly gained a lot of experience and soon felt the urge to challenge himself further and go out on his own, writing and recording as a solo musician. Consequently, he left Graveyard Dirt in 2011 after the release of 'For Grace Or Damnation' and decided to concentrate on releasing music by himself.

This is the first such release...

Entitled The Effa Lente Configuration: Parts 1-4, it's a full album weighing in at 44.5 minutes long, but with only one track... You're thinking this has to be one of two things, doom or prog, right? Those thinking the latter would be correct. It is in fact a record one would associate with the prog rock genre... think Steven Wilson, Opeth, King Crimson, early Queen, Mike Oldfield, Muse, Frank Zappa and or Yann Tiersen...


Reilly talks about the inspiration behind the project, "The idea started one night while I was watching a Quentin Tarantino movie, and the thought occurred to write a piece of music where, much like the movie, the resolution of various parts wouldn't necessarily happen immediately, they could happen somewhere later in the piece. And also, not everything in the music would be about 'the plot', it would go off at various tangents in between the main events. Again, just like the movie."

"What started out as a single piece of music that lasted around 15 minutes, quickly expanded as more and more music was written. Eventually there were 4 distinct parts spread out over 45 minutes, with each part containing its own parts within, but the plan was to keep them all together as one continuous piece, rather than present them separately. This would not only be a challenge for the writer/performer, but also for the listener."

"The end result is a 44.5 minute piece, sounding like a cross between a prog band and a film score. A unique musical experience."

Artwork was done by Ewa Miszczak at Emoi Art. The album was composed, performed, produced and mixed entirely by David Alfred Reilly in his own studio in Dublin before Richard Dowling (Anathema, Brian Eno, Carcass) took over for mastering detail.