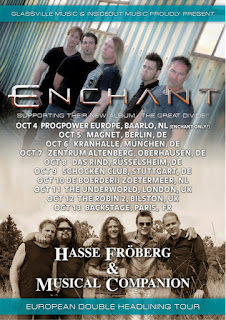 Enchant's Douglas A. Ott checked in about the band's upcoming touring activity: "We are super excited to be headed back to Europe to play for our fans! It's been way too long and we're looking forward to being back on the road performing again, playing old favorites and a bunch of new material from The Great Divide! We are doing a double headlining tour with Hasse Froberg & Musical Companion, which will be a great overall evening of killer progressive music every night! Hope to see everyone come out for these shows!"