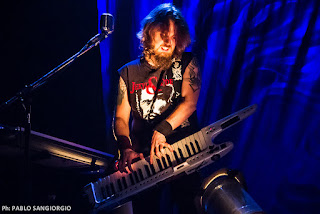 Henrik “Henkka” Klingenberg is a stunning keyboardist and amazing keytar player which keeps touring all over the world with Finnish Power-Metal band Sonata Arctica.
Although his main involvement is with Sonata Arctica, he is also a member of the band Silent Voices and a thrash/groove metal band called Mental Care Foundation (in which he is the vocalist rather than the keyboardist). He has also recently started a melodic death metal side project called Graveyard Shift as vocalist with his former Sonata Arctica bandmate Jani Liimatainen. http://www.vivaldimetalproject.com/henrik-klingenberg-keyboards/
Henrik Klingenberg