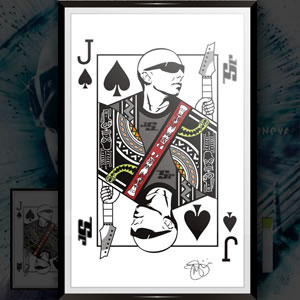 
“Behind The Songs” – Web Series Premieres
REDDIT “AMA” Session Confirmed for July 24th
AOL’s “BACKSTORY” Event in NYC on July 24th
(Los Angeles – July 15, 2015) Legendary guitarist, JOE SATRIANI, is gearing up for the release of his 15th solo studio album, Shockwave Supernova, on Friday, July 24th.  The weeks leading up to the album release continue to be filled with exciting activity from the renowned guitarist.
Recently, SATRIANI began debuting a web series he’s dubbed, “Behind The Album,” which gives fans a rare glimpse behind the scenes while making “Shockwave Supernova”.  The album was co- produced with John Cuniberti and recorded at Skywalker Sound in Lucas Valley, CA, with keyboardist and guitarist Mike Keneally, drummer Marco Minnemann and bassist Bryan Beller.  The band are featured, with SATRIANI, in the “Behind the Album” series discussing the album recording process, the songs and the themes behind the album.
On release day, Joe will participate in a Reddit “AMA” event where his fans will be able to ‘Ask Joe Anything’ during the online press conference event at 1pm ET.  That same evening, Joe will be the special guest on the new AOL original series, “BackStory” involving a live, feature-length interview with the guitar virtuoso to air from the AOL Studios in New York City.  The event will allow guests to enjoy a seat at an exclusive, career-spanning live interview, a meet-and-greet with Satriani, an autographed copy of Shockwave Supernova, plus complimentary beverages. Satriani will be interviewed one-on-one by respected journalist, Brad Tolinski as they discuss the new album and much more.
Leading up to the album’s release, exclusive song premieres have taken place on various music websites and accompanying “story videos” have followed on Satriani’s website and through his social media.  This week, Rolling Stone premiered an exclusive video of the iconic guitarist as he interprets various pop culture and art references, off the cuff interpretations left the magazine staff in awe.
Check out the video here:  http://rol.st/1K7xHc5
Fans are able to pre-order the new album with an exclusive signed poster only at satriani.com. Joe selected the art for the poster fans who submitted it.  The album is available for pre-order on Amazon (http://smarturl.it/satriani_SS_amzn) and iTunes (http://smarturl.it/satriani_SS_itunes) and will also be available to order as 2 LP 120 gram vinyl.
Reddit AMA:
http://www.reddit.com/r/AMA/
Joe Satriani