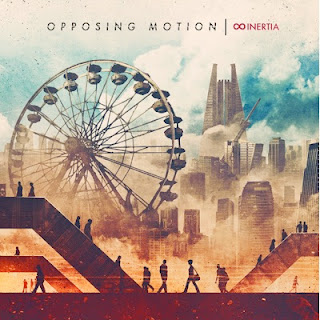 UK-based progressive metal outfit OPPOSING MOTION are excited to unveil the artwork and track listing for the successor to their 2013’s debut “Laws of Motion”, released by Lion Music. This second LP, titled INERTIA, will be released early 2016 and showcase 11 new tracks of the band’s trademark melodic progressive metal sound, initiated in 2010 with the release of the first EP “The Illustration”. The album will be mixed and mastered at Domination Studios in Italy by Simone Mularoni, producer of many of the genre’s top acts such as DGM, VISION DIVINE, LALU, EMPYRIOS etc.

The album’s original artwork is in the hands of the talented team at Mayhem Design, recently in charge of PYRAMAZE latest offering. Keeping with the tradition of the genre’s striking covers art, the artist created a strong new imagery for the band, illustrating many of the lyrical themes evoked in the new tracks, while subtly connecting it to the band’s original vision and signature visual themes.

Although INERTIA is not a concept album in the purest tradition, many of the lyrical themes are connected, as implied in the title, to the concept of constant motion, unstoppable forces, resilience and our ability to always move forward despite adversity while overcoming personal battles and hardships. Several tracks also explore literary works dear to the band that contain references to historical events, dystopian futures and mythical journeys, all centered on the concept of INERTIA.

The track listing for INERTIA is as follows (total running time: 65 min)