Raveneye: Confirmed On Tour With Slash in the U.S. 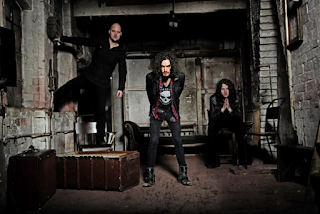 "Breaking Out is a filthy monster of a song, and we'd claim to have discovered them were it not for the fact that the track has had nearly 100,000 Soundcloud plays since it was uploaded last month"
- Classic Rock Magazine -

After a hugely successful Europe run with SLASH, RAVENEYE are thrilled to announce the legendary rocker has extended his invitation for the UK band to rejoin him on his US tour, starting October 7th in Minneapolis before hitting Canada for several dates, and then onto U.S. cities including Seattle, Denver and Los Angeles. Before the Slash dates begin, RAVENEYE will make their US debut at the Louder Than Life Festival in Louisville on October 3rd. At the conclusion of the SLASH dates, the UK trio will hit the Aftershock Festival in Sacramento on October 24th.

RAVENEYE are celebrating the release of their new single, “Breaking Out” while their self-titled debut EP has been riding high in the Amazon best sellers list. The UK rock trio has had a busy summer doing what they do best, touring relentlessly. They hit the road throughout June and July with the Blues Pills and as special guests of Slash – on an amazing run of dates across Europe. In addition, they have topped the rock chart for 3 weeks running at influential radio station RockFile Radio.

Even though he’s still only 25 year sold, Oli Brown, singer and multi award winning guitarist, has already released four solo albums and toured the world for 10 years with legends such as Jeff Beck, Buddy Guy, Johnny Winter and Joe Satriani. Mojo Magazine hailed Oli as; 'the hottest young pistol in British blues' - Classic Rock Magazine described him as "one of the best and brightest guitar heroes performing in the world today". He recorded the 5 tracks on “Breaking Out”late last year, before teaming up with drummer Kev Hickman and bassist Aaron Spiers and to take the songs out live - et voilà – RavenEye was born.


Filled with deep, bluesy grooves which invoke giants such as Zeppelin and Soundgarden the band (who only formed a year ago) are winning fans around the world with their huge sound and killer live shows.

"Fuzz-tacular Garage Rock" Kerrang!
"A filthy monster of a song" Classic Rock
"…the title track of the EP has a riff so big it could protect the Seven Kingdoms of Westeros" Total Guitar