EP of the Week: MeridieM 'Odysseia'

MeridieM stands poised to take over the instrumental realm with Odysseia and Nicole’s on her way to the pantheon of guitar greatness. A new hero arrives with this expansive and entrancing EP.
Read more at http://www.artistdirect.com/entertainment-news/article/ep-of-the-week-meridem-odysseia/11787942 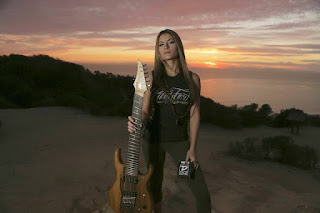 In this fast-paced, modern world fixated on the open and close to each idea, sometimes the power of transition can get lost in the haze. To liberate, you must embrace a true openness to any possibility and the awakening of a potential shift in energy. That dream-catching balance and hope is the essence of MeridieM, the four piece musical collective that captures the beauty and brutality of chance. Coming in like rolling thunder against a lullaby, MeridieM explore the regions of musical extremities while carefully showcasing each element. With their debut EP Odysseia, the band tap into the spirit of the unknown and heavily explore the grace of structural freedom.

The current members of MeridieM were the instrumental backbone of the now defunct alt-prog rock group Eye Ra Haze. Building a strong musical bond and camaraderie though songwriting, guitarist Nicole Papastavrou, pianist Karine Catenacci, drummer Kevin Corcoran and bassist Chris Marrone formed MeridieM. The quartet were organically able to move forward in the creative process, further exploring the depth and voice of each instrument, while collectively expanding their musical horizons. This freedom gave MeridieM the free-range power to further explore the reach of their personal abilities and produce a musical outcome that is distinctly progressive, while simultaneously melodic and undeniably heavy.


MeridieM's debut EP Odysseia nods to jazz composition, foregoing traditional structures while tying each segment back beautifully to plush piano arrangements coupled with crushing riffs. The EP boasts a mix that highlights each nuance of this instrumental intertwining and aims to bring listeners along for the musical voyage. Live piano is ferociously coupled with standout bass, succinct distorted guitars and a perfectly aligned rhythm section. Percussive experimentation is paramount in this release, with a fierce focus on craftily weaving varied rhythms into deep grooves.MeridieM launch you into an audio journey of gorgeously juxtaposed sounds that are spread through a variety of mediums. The first single off of the EP, "Supernova," takes listeners on a musical trail of growth and exploration. Sonically it is a natural progression for the musical unit both brutally commanding and lush, with an exploratory nod to that idyllic "space in-between."

In writing the Odysseia EP, the band took time to remotely cultivate their contributions though the convenience of technology. Spread across several different areas, they took advantage of their ability to interpret each layer independently via Dropbox and ProTools. This unique collaborative effort spawned a sound that is indigenous to the group and individually flattering to their personal growth. Every song on the EP represents a deep mix of emotions, offering listeners a front-seat view of their journey. In 2015 MeridieM are poised to further expand and evolve musically - sit back, open your mind and enjoy the process." -Zeena Koda