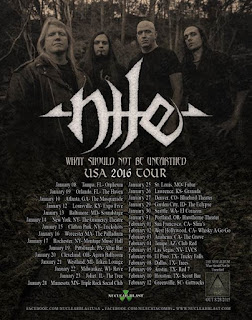 The reigning kings of technical, historically-themed brutality, NILE have announced a momentous 31-date trek across North America in 2016. The tour launches in Tampa, Florida on January 8th, hits New York, West Hollywood, Pittsburgh, and wraps up at a very special hometown show in Greensville, South Carolina on February 12th.


“We are extremely happy to bring our new album What Should not be Unearthed to NILE fans in the states. We will of course be playing a wide variety of classic NILE tunes as well each night as we take this tour to US cities both familiar and new to us. As long time supporters of the metal underground,NILE is also happy to announce that This tour will be further blessed by having local metal bands in each city as support acts. Also noteworthy and of special meaning to the band, is the homecoming show at the close of the tour; it has been ten years since we have played in our own hometown. Join us for an extreme evening of brutal metal!”

Advanced tickets for the confirmed tour dates are now on sale exclusively atEnterTheVault.com.

Tickets will go on sale August 22nd at all other ticket outlets.

Confirmed dates for the upcoming NILE 2016 tour are:

NILE’s eighth full-length studio album, What Should Not Be Unearthed, is scheduled to be released on August 28th via Nuclear Blast Records. Produced by NILE and mixed byNeil Kernon. The artwork is by Michal “Xaay” Loranc.

Pre-order your copy of NILE’s new masterpiece What Should Be Unearthed on theNuclear Blast Webshop:http://goo.gl/dR3wTQ
Nile