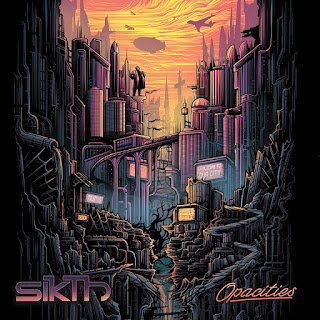 We are proud to announce that the new mini album will be called OPACITIES and unveil the cover artwork that has been created by Dan Mumford.

MIKEE : "I really love what Dan Mumford has done here. There is a clear divide under the cityscape between the bright over indulgent lights of the riches and then the squalor underneath. The concept of Opacities comes from the layers we see beneath the surface. The undertone of the city. It can relate to anything though whether it be humans or whatever . Also inspired by the hypocrisy in modern culture."

The mini album is made up of 6 songs including one spoken word and is available for pre-order viawww.pledgemusic.com/sikth it is now fully recorded and being mixed by Forrester Savell.

After the November release, we have a December UK Tour scheduled with support coming from Hacktivistand Feed the Rhino.