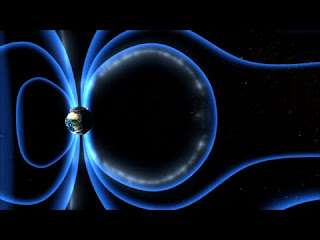 A nest that protects us like a protective cage from the charged particles continuously ejected from the Sun, especially during the phases of its activity. The solar plasma never reaches the Earth's surface but is channeled along the polar openings of the magnetic field interacting with the atoms of the ionosphere resulting in the spectacle of the aurora borealis.

While masochists and media terrorists continue to fear the "absolute end of the world" because of the Sun (and many people believe) people forget to think about how our world is designed well and how much beauty there in store daily, hour, every minute, every second, even when we have the chance to see the "green flash" just seconds before the setting of the sun.