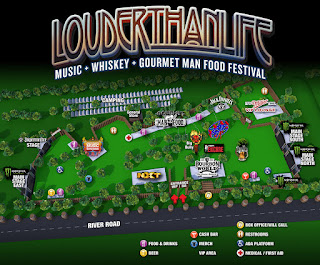 Band performance times for the second annual LOUDER THAN LIFE have been announced at www.LouderThanLifeFestival.com. The destination festival features award-winning bourbons and spirits, craft beer, Gourmet Man Food, and a powerful music lineup at Champions Park near downtown Louisville October 3 & 4, 2015.

Festival producers are also excited to announce Tito’s Handmade Vodka as the official vodka of LOUDER THAN LIFE.

Describing his experience at the inaugural LOUDER THAN LIFE in 2014, Oli Sykes of Bring Me The Horizon recently told Revolver (October/November 2015), "They’re turning these festivals into more than a festival—it’s like an event for everyone to come to, and I think that’s something that a lot of festivals lack these days. Makes it a bit more fun, doesn’t it?”

LOUDER THAN LIFE features a selection of award-winning bourbons, whiskey, spirits, craft beer, and Gourmet Man Food curated personally by festival creator Danny Wimmer, along with a powerfulmusic lineup of rock legends and breaking talent including Rob Zombie, ZZ Top, Godsmack, Shinedown, Lynyrd Skynyrd, Slash featuring Myles Kennedy & The Conspirators, Breaking Benjamin, 3 Doors Down, Bring Me The Horizon, and many more. Bands will perform on four stages, while attendees will enjoy bourbon exhibitions and sampling, along with more than 70 food and beverage vendors that will help celebrate the bourbon culture and culinary heritage of this unique American city.

The LOUDER THAN LIFE live, in-ring matches with WWE®’s NXT Superstars will include Finn Bálor™, Tyler Breeze™, Bayley™, Baron Corbin™, The Vaudevillians™, Enzo Amore™, Big Cass™, Carmella™, and more (talent subject to change). The current NXT schedule for both days of LOUDER THAN LIFE is as follows:

The daily performance times for LOUDER THAN LIFE are as follows (subject to change):

General admission tickets, VIP tickets, and hotel packages for LOUDER THAN LIFE are available now at www.LouderThanLifeFestival.com. In addition, 2-Day General Admission NO SERVICE FEE tickets are available at The Muhammad Ali Center (144 North 6th Street in Louisville) for $99.50 while supplies last. Ticket discounts are also available for active military through LOUDER THAN LIFEpartner GovX.