Mike Oldfield: “The Space Movie” Original Soundtrack To Be Released On CD For The First Time 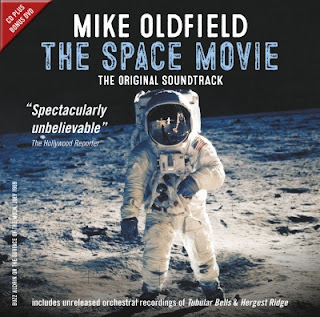 "London, UK - GONZO Multimedia will be releasing a newly restored and (finally) complete edition of Mike Oldfield and Tony Palmer's “The Space Movie.” For the very first time the original soundtrack featuring all the talk-back between the astronauts and ground control, as well as orchestral versions of music by Mike Oldfield will be released on CD!

This classic film was originally commissioned by London Weekend Television and Virgin Films in 1979 to mark the 10th Anniversary of the first landing on the moon, July 21st 1969. A recent discovery of a print in mint condition has enabled us to issue the film in a sparkling new (and complete!) edition.

Producer Tony Palmer explains, “The invitation to make the film came out of the clear blue sky from NASA in January 1978. I was invited to Washington and shown the mountain of film NASA had collected from the very beginnings with John Glenn, the first astronaut to orbit the earth in February 1962, until Apollo 17 December 1972. Use whatever I wanted, I was told, plus all the talk-back between ground control in Houston and the various space missions. NASA's extraordinary and spectacular images made me realize I had access to a treasure house beyond imagination.

“From the beginning, I wanted Mike Oldfield to write the music, and the soundtrack which emerged – a combination of hitherto unreleased recordings including the orchestral versions of Oldfield's early masterpieces, 'Tubular Bells' and 'Hergest Ridge' - is remarkable, perfect in every way; evocative, powerful, an inspiring match for the images. And I'm sure it is that, plus of course the astonishing NASA footage and the sound of the astronauts chatting away in space. Virgin Films may have long gone, but together these elements made and make the film what it is - something rather special.”

At a Gala Screening in the Egyptian Cinema in Hollywood in 2008, the film was introduced by Buzz Aldrin, the second man to walk upon the moon. He said: “It gives me enormous pleasure, and a thrill, to be able to introduce Tony Palmer's remarkable film about our space adventures. I say remarkable because at the time it was made, 1978/9, very little of the footage you are about to see had ever been seen in public, images which are now so familiar as to be truly iconic. But it was Tony who used them first, and we are very pleased that he did, even if he did construct the longest take-off in history! I still get a chill hearing some of the talk-back which, like the footage, NASA had provided for Tony to use. When the rocket takes off, boy is that a roller-coaster ride, bumpy as hell. So when you hear my voice saying 'little bit of shaking there', you'll know what I mean! So thank you Tony for what you did.”

The distinguished film critic Alexander Walker said after the first screenings: “The best British film screened at Cannes (in 1980) was Mike Oldfield and Tony Palmer's 'The Space Movie', with unique footage from NASA and music by Mike Oldfield. Palmer’s film combines both in a wonderful, at times profoundly moving, tribute to the astronauts from Cape Kennedy. The film includes one of the finest space launches ever collated, with footage that is unbelievably spectacular. Full marks to director Tony Palmer. The result is breathtaking, beautiful and brilliant.”

This version comes complete with Director's Cut BONUS DVD of the movie.

An exclusive screening of the 80-minute restored version of “The Space Movie” will be held at Cinema 2 at The Barbican in London on Sunday 15th November at 6 pm. http://www.barbican.org.uk/film/new-cinemas
Mike Oldfield