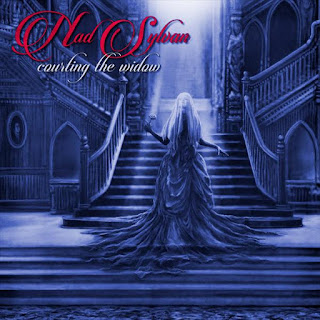 Renowned for his collaborations with Steve Hackett and Roine Stolt, Nad Sylvan now releases “Courting The Widow”, his first solo album since 2003, which marks his debut for InsideOut Music. Rooted in classic progressive rock and sporting a thought-out concept, Sylvan considers the new record “very much a symphonic album. However, there are funky touches in there as well. You will hear hints of classic Motown. Because I like to mix things up. As far as I'm concerned that's what you should be doing if you want to be progressive, surprising people and doing the unexpected.” Sylvan achieved exactly that and “Courting The Widow” also features an impressive cast of guests including Steve Hackett (ex Genesis), Roine Stolt (The Flower Kings, Transatlantic), Nick Beggs (Kajagoogoo), Jonas Reingold (The Flower Kings), Nick D'Virgilio (ex Spock's Beard), Gary O'Toole (Steve Hackett band), Doane Perry, Annbjørg Lien, Lars Drugge, Rob Townsend, Jade Ell & Skrut the cat. Sylvan concludes: “I feel that I have delivered an album that's true to myself and my values in life. It's heartfelt, passionate, emotional and full of dramatic passages. I'm proud of what I've done here, artistically and musically.” To witness Nad Sylvan live, do not miss the extensive Steve Hackett world tour running until December 2015.


Titel Courting the Widow (Gatefold black 2LP+CD)
Artist Nad Sylvan
Format 2 LP
Label InsideOut Music
Release Date 16.10.2015
Packaging Group II
Item number 0IO01485
Pre-orders will be shipped during the week before 16.10.2015 with the intention of street date arrival (which is in Germany, Austria and Switzerland Fridays, in any other country the following Monday) , but this is not guaranteed. Any items added to the pre-ordered products will be held until this item is ready for dispatch.

http://www.insideoutshop.de/Item/Nad_Sylvan_-_Courting_the_Widow_-Gatefold_black_2LP-CD-/16141
Nad had this to say about the album: "During these past years with Steve Hackett, I have developed a character known as the "Vampirate". I have here set him loose, and so he has invited you all on-board his great ship, to take you on a musical journey
you have never been on before.
The main character - the widow herself, is a symbol of death - and is to be courted through every song, one way or another. It is indeed a dark album, but full of loving light"

Nad has most recently been seen performing alongside the legendary Steve Hackett as part of his Genesis Revisited show, continuing his stint into the latter part of this year. Nad adds: "In a little less than four years, I was snatched up by two iconic guitarists,
namely Roine Stolt and then Steve Hackett. That must mean something to the world, because it sure means an awful lot to me". Nad formed Agents of Mercy with Roine Stolt (The Flower Kings, Transatlantic) in 2009, and have released three albums to date.