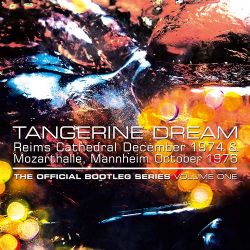 
Esoteric Recordings’ REACTIVE label is proud to announce the release of the first volume of an official bootleg series by the legendary TANGERINE DREAM. Formed in Berlin in September 1967 by Edgar Froese, Tangerine Dream are simply one of the most important groups to have emerged on the German music scene of the late 1960s / early 1970s. Always guided by the genius of Edgar Froese, Tangerine Dream developed a sound based on the use of synthesisers and keyboards, first revealed on their marvellous "Alpha Centuari” album in 1971. In Britain, John Peel soon began to promote the band on his influential radio show which ultimately led to Tangerine Dream becoming one of the first acts to sign to Richard Branson’s newly established Virgin label in 1973. Tangerine Dream’s music would influence a whole host of musicians who followed in their wake, such as Julian Cope.
Featuring recordings made at Reims Cathedral, France in December 1974 and at the Mozarthalle, Mannheim, West Germany in October 1976, this 4 CD set (with over four hours of music) has been compiled with the official approval of Tangerine Dream and features two concerts that were voted as some of the finest bootlegs in existence in a recent poll of fans.


The concert at Reims Cathedral has gone down in Tangerine Dream history as a legendary event. The music performed by Edgar Froese, Christopher Franke and Peter Baumann was exemplary, although the circumstances surrounding the staging of the concert led to a ban on further performances in Cathedrals by The Vatican. The concert at the Mozarthalle in Mannheim is another fine example of the excellence of this incarnation of Tangerine Dream on stage.


This official 4CD clamshell boxed set has been re-mastered from the best available sources and includes an illustrated booklet with a new essay.


N.B This title is released 23rd October 2015 and will not be dispatched until this date.