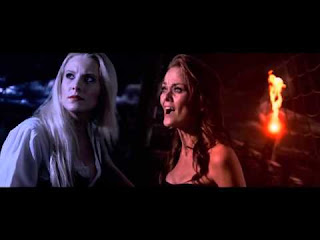 ON TOUR WITH DELAIN & THE GENTLE STORM!
After their last highly acclaimed 2014 album “Magic Forest”, female fronted Finnish Symphonic quintet Amberian Dawn return with "Innuendo", their second studio album with gorgeous singer Päivi "Capri" Virkkunen. Presented in a catchier and more melodic way than previous efforts, Innuendo sounds like a deliberately fresh new start with some of strongest vocal performances in the band’s history. With production work from Mikko Karmilla (Amorphis, Apocalyptica) and Tuomas Seppälä's apparent influences of the likes of Jean Michel Jarre to Vangels, Innuendo showcases the epic trademarks of an album that could easily place the band into the forefront of the Symphonic Metal genre! "Innuendo" is a term most famed by Queen and their album titled the same, but as time goes on, some might also come to think of Amberian Dawn alongside those British rock heroes.