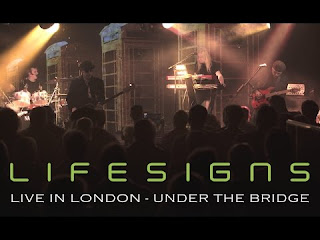 Filmed at London's premier live music venue "Under The Bridge" on 23 January 2015 by award winning film director Paul Shammasian this set is a superb representation of the unique talents and spectacular live show of Lifesigns performing their debut album in its entirety along with four new, as yet unreleased tracks (Different being one of them).

Following the 2012 release of their exceptionally well received debut, Lifesigns have taken the show on the road across the UK, Europe and the first USA Prog Cruise "To The Edge Of The World" sharing bills with Yes, Thee Friends (Gentle Giant), Steve Hackett, Marillion and UK among others.

After only 26 shows (at the time of filming) Lifesigns are firing on all cylinders and the "Live Under The Bridge" show captures one of the key performances of the band's first year of touring, captivating fans with a rich visual experience and pristine quality sound.

Order your copy now from http://www.lifesigns.me/product/dvd-a...

Every purchase will also include a 24bit /96kHz audiophile version of the audio mixes (link to follow).

Lifesigns would like to thank all of you who continue to support the band.

Please spread the word, Like and Subscribe here and also at https://www.facebook.com/Signslife
http://www.lifesigns.me/events/
Lifesigns "Live Under The Bridge" 2015 - Official DVD Trailer