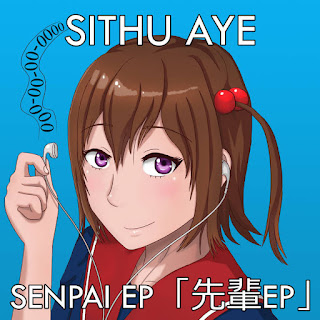 about
Senpai EP was never planned as a release, and started out as a joke for a mixtest for my new Mayones Regius 7 and Axe-FX II. However, after releasing a playthrough for the song on youtube, with some choice doodles of an anime girl trying to get noticed by her senpai, I was slowly convinced that doing an EP of anime inspired music would be a good idea.

In the Senpai EP, each song is meant to capture different vibes from anime music.

"Oh Shit, I'm Late for School!" follows that now classic trope of running to school for a piece of toast in your mouth and the electro-pop style is one that is very often used for slice of life or romantic comedy anime.

"Senpai, Please Notice Me!" tries to capture that tried and tested trope of falling in love with your high school senpai, one that is used so much in anime that it became an internet meme.

And finally, "The Power of Love and Friendship!" is meant to represent the vibe from battle anime, where even if you're badly losing a fight, just remembering that you're really good friends with everyone will spur you onto victory.

This EP is unashamedly cheesy and cliché and I make no apologies for it, because it was incredibly fun to make and if it conveys even a fraction of the enjoyment that I get out of anime to you, then I consider this EP a success.

I hope you all enjoy the Senpai EP. I-i-it's not like I made it for you guys or anything!
credits
releases October 12, 2015

All music written, recorded, mixed and mastered by Sithu Aye.

A huge thanks to Hayato Imanish for providing translations for the track titles, having them in Japanese as well as English provides a level of authenticity I couldn't have hoped to achieve by myself.

And finally, thank you to all my friends who all told me that this EP was a stupid idea, but pushed me to do it anyway.