Devin Townsend: live performances have always been experiences of special extravaganza - own it now on DVD 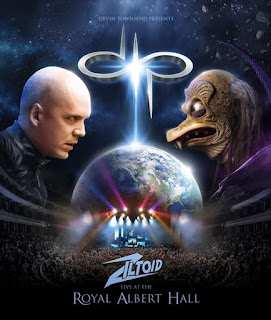 Never afraid of the artistic leap of faith, Devin Townsend’s live performances have always been experiences of special extravaganza, just like the musical landscapes he creates. The larger-than-life evening at the legendary Royal Albert Hall however tops everything the inclined Devin fan has had the chance to witness so far. “Devin Townsend Presents: Ziltoid Live at the Royal Albert Hall” was filmed on April 13th 2015 at the world famous Royal Albert Hall in London, UK, shot with 14 high definition cameras. The show sold out within days of going on-sale. Featuring the entire ‘Dark Matters’ album from ‘Z²’, played front to back, plus a 2nd set of the most popular tracks from Devin’s career as well as rarely played tracks (picked by the fans through a Facebook poll in advance of the event), this release offers a perfect overview of Devin’s work past and present. The show was directed by Paul M Green (Devin Townsend, Opeth, BB King, Steve Hackett) and features special guests such as Dominique Lenore Persi (Stolen Babies), Chris Jericho (world-famous wrestler and singer of US band Fozzy) and Jean Savoie, with video narration by Bill Courage, as well as 12 singers & actors as cast and choir. An extra thumbs up to the audience at this show, who passionately sung along and turned this into a very exciting, unique event in Devin’s career.

As detailed and versatile as the evening itself, the release is available in different formats: as Artbook of 44 pages incl. the entire concert as well as extensive behind-the-scenes bonus footage and a full documentary, pressed on 3 CDs, 2 DVDs and a Blu Ray Disc, as Special Edition Digipak with 3 CDs and a DVD and as BluRay including the entire show and bonus material.