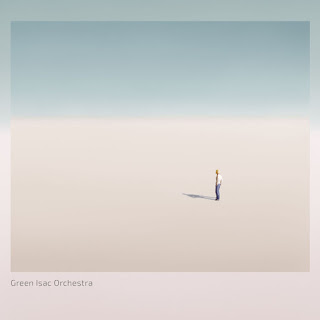 After an adventurous twenty-five year career artfully blurring the lines between traditional ethnic acoustic and contemporary electronica, the duo known as Green Isac have expanded their sound to include three additional artists, leading to the latest project titled the Green Isac Orchestra.

For those who have followed Andreas Eriksen and Morten Lund since the beginning and have enjoyed the wide net they’ve cast masterfully over multiple styles and genres, the same delicious fusions are present, only this time there’s an immediacy to the recording suggesting it erupted spontaneously as one inspired live performance.

Both die-hard fans and those discovering Green Isac for the first time are in for a treat. This album promises to be an engaging eclectic journey as it carries the listener deep into the heart of an exotic musical setting of shifting moods and regional hues, stylistically melding elements of mellow jazz, Steve Reich minimalism, and ambient atmospheres into a Fourth World fusion. The range of instruments used by Green Isac Orchestra is equally impressive: piano, mellotron, synthesizers, samplers, and electronic drums; ethno-acoustic beats from the djembe, tumbadora, shekere, ghatam; plaintive melodies from electric cello, Variax guitar, shahi baaja, kalimba, and Chinese hammered dulcimer – all masterfully crafted and interwoven into an authoritatively expressive presentation.

This new Green Isac release is an unforgettable odyssey far removed from the mundane — a place of serene tributaries and unexplored villages of sound that climax into an enchanting jubilant festivity of melody and harmony.
credits
released November 6, 2015

Other Albums by Green Isac